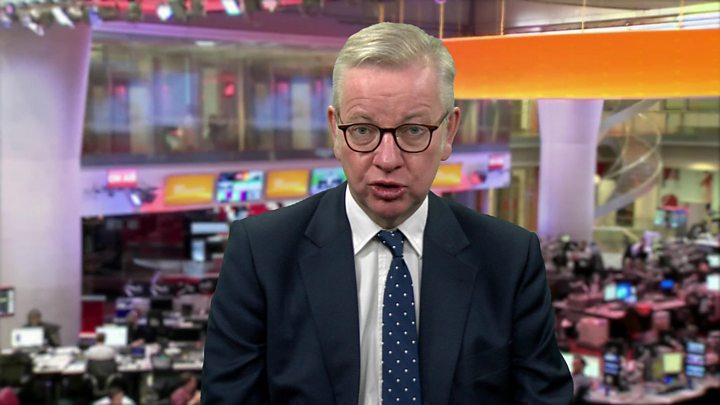 Media captionMichael Gove: “What we can’t have… is the EU disrupting or putting at threat the integrity of the UK”

The government is being “generous” with the EU over Brexit negotiations, says Michael Gove.

The cabinet minister said the UK was trying to protect the single market – but warned the EU could not threaten “the integrity of the United Kingdom”.

His comments came after Prime Minister Boris Johnson urged Tory MPs to back his plan to override part of the Brexit Withdrawal Agreement.

The EU has said the UK could face legal action over its Internal Market Bill.

The bill, which will be formally debated in the House of Commons for the first time on Monday, addresses the Northern Ireland Protocol – the part of the Brexit Withdrawal Agreement designed to prevent a hard border returning to the island of Ireland.

If this became law it would give UK ministers powers to modify or “disapply” rules relating to the movement of goods between Britain and Northern Ireland that will come into force from 1 January, if the UK and EU are unable to strike a trade deal.

Mr Gove said: “These steps are a safety net, they’re a long-stop in the event, which I don’t believe will come about but we do need to be ready for, that the EU follow through on what some have said they might do which is, in effect, to separate Northern Ireland from the rest of the United Kingdom.”

While admitting it was a “crunch moment”, he insisted “we have got the support of our own MPs”.

The two sides have less than five weeks to agree a deal before Mr Johnson’s 15 October deadline – after which he says he is prepared to “walk away”.

Informal talks are due to resume on Monday, with the next official round of talks – the ninth since March – starting in Brussels on 28 September.

The EU says the planned changes must be scrapped or they risk jeopardising the UK-EU trade talks.

But the government has rejected this demand, arguing the measures in the bill are needed to protect the integrity of the UK and the peace process in Northern Ireland.