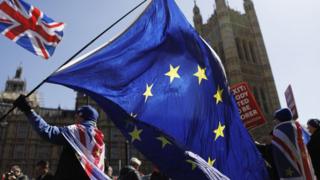 MPs have given their final backing to the bill that will implement the UK government’s Brexit deal.

The Commons voted 330 to 231 in favour of the Withdrawal Agreement Bill and it will now pass to the House of Lords for further scrutiny next week.

If peers choose to amend it will it come back before MPs.

The UK is due to leave the EU on 31 January.

The bill comfortably cleared its third reading in the House of Commons, as expected, with a majority of 99. All 330 votes in favour were Conservative.

It took just three days for the bill to pass the remaining stages in the Commons, after MPs gave their initial approval to the legislation before the Christmas recess.

Theresa May – Boris Johnson’s predecessor in Downing Street – repeatedly failed to get her Brexit agreement passed by MPs, which led to her resignation as prime minister.

The latest vote gives approval to the 11-month transition period after 31 January, in which the UK will cease to be an EU member but will continue to follow its rules and contribute to its budget.

The purpose of the transition period is to give time for the UK and EU to negotiate their future relationship, including a trade deal.

“They have voted for a bill that will slash the rights of future generations to live and work across 27 other countries,” he said.

“They have voted for a bill that strips away our guaranteed environmental protections, despite the fact that we are facing a climate emergency.”

“This is a constitutional crisis, because we will not and we cannot accept what is being done to us,” he told MPs.