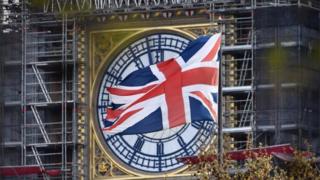 MPs will resume scrutiny later of the legislation needed to implement the prime minister’s Brexit deal.

Boris Johnson’s election victory means the Withdrawal Agreement Bill is set to get through Parliament comfortably, MPs having overwhelmingly backed it at its first stage last month.

The bill covers “divorce” payments to the EU, citizens’ rights and customs arrangements for Northern Ireland.

The UK is set to leave the EU on 31 January.

Theresa May – Mr Johnson’s predecessor in Downing Street – repeatedly failed to get her Brexit deal passed by MPs which led to her resignation as prime minister.

But before Parliament closed for the Christmas recess, MPs gave initial approval to Mr Johnson’s bill by 358 votes to 234.

What will MPs debate?

The bill now moves on to the next phase of the parliamentary process, what is known as the committee stage. It will be analysed in detail over the next three days before moving to the Lords.

With the government enjoying a Commons majority of 80, it will not be changed in any way without the support of ministers.

On Tuesday, MPs will debate the 11-month transition period after 31 January, in which the UK will cease to be an EU member but will continue to follow EU rules and contribute to the EU’s budget.

The purpose of the transition period is to give time for the UK and EU to negotiate their future relationship.

The UK has said this can be done by the end of 2020 and the bill rules out extending the transition period beyond that point – even if a free trade deal with the EU has not been agreed.

Labour are proposing amendments to ensure Parliament and the devolved nations are consulted during trade talks with the EU, while it also wants the government to aim for close alignment with the EU during the negotiations.

And the SNP have put down an amendment which would exempt Scotland, which voted to stay in the EU, from the provisions of the bill.

MPs will also debate citizens’ rights, with Labour, the SNP and the Lib Dems all having submitted amendments seeking to guarantee the rights of the three million or so EU nationals resident in the UK.