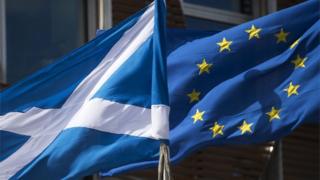 MSPs have voted not to consent to the UK government’s legislation to set up an “internal market” after Brexit.

The Internal Market Bill is making its way through the Commons, but has led to rows with the devolved administrations.

However, the Scottish Tories argued that the legislation will protect jobs and deliver “significant” new powers.

MSPs voted by 90 to 28 to say that parliament “agrees not to consent” to the UK legislation as it “constrains the competence of the Scottish Parliament and breaches international law”. Only the Conservatives voted against the motion.

The Scottish government argues that Holyrood’s consent is required under the Sewel Convention – which says the UK government will normally consult devolved bodies before passing a law that affects powers they exercise.

However, the last time MSPs voted to refuse consent – over the EU Withdrawal Act – the Supreme Court ruled that while Sewel was important, it was a convention only, and could not be policed by the court.

Cabinet Office minister Michael Gove has already indicated that the UK government will press ahead with the legislation even without devolved consent, saying that “leaving the EU is not a normal occurrence, it is an exceptional one”.

The UK government has clashed with the EU over provisions in the Internal Market Bill which ministers admit would “break international law” by overriding parts of the Brexit withdrawal agreement.

They are also locked in dispute with the devolved administrations over what the legislation could mean for trade and regulations across Scotland, England, Wales and Northern Ireland from January 2021.

The proposed system of “mutual recognition” would see each administration set standards and regulations locally, but they would still have to accept goods from all other parts of the UK.

The UK government say this is important to make sure there is still a free flow of goods and services across the UK, but the devolved administrations say it could spark a “race to the bottom”.

The parliament’s constitution committee recommended MSPs reject the bill, with the exception of the three Tory members, with MSPs from all other parties saying they were “dismayed” by the UK government’s approach.

Mr Russell told MSPs that the bill would “take a wrecking ball to Scotland’s parliament and democracy” and would place a “blanket constraint” on Holyrood’s powers.