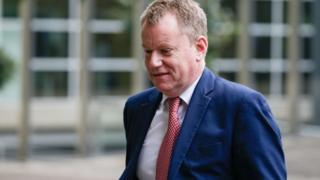 The UK “must have the ability to set laws that suit us,” the PM’s chief Brexit negotiator will say in a speech in Brussels.

David Frost is expected to set out the UK’s stance ahead of post-Brexit trade negotiations, due to start next month.

He will dismiss the idea an EU court would have a role in future trade disputes, saying: “We only want what other independent countries have.”

It comes as France warns Britain to expect a bruising battle during talks.

Acting Liberal Democrat leader Ed Davey said: “Boris Johnson should listen to the views of British businesses who want to maintain the closest possible alignment with the European Union.”

Addressing students and academics at the Université libre de Bruxelles, Mr Frost is expected to say: “It is central to our vision that we must have the ability to set laws that suit us – to claim the right that every other non-EU country in the world has.

“So to think that we might accept EU supervision on so-called level playing field issues simply fails to see the point of what we are doing.”

He will say this is not a “a simple negotiating position which might move under pressure – it is the point of the whole project”.

He will also reiterate the government’s insistence that it will not extend the transition period beyond the end of this year.

The transition period runs until 31 December 2020, during which time the UK continues follow EU rules – including freedom of movement.

It is intended to allow time for the UK and the EU to agree a post-Brexit trade agreement.

One of the key sticking points could be the idea of ensuring a level playing field – which will be referred to by Mr Frost in his speech.

The EU wants the UK to sign up to strict rules on fair and open competition – known as level-playing-field guarantees – so if British companies are given tariff-free access to the EU market, they cannot undercut their rivals.