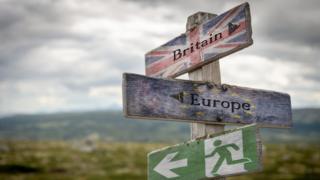 The leaders of four pro-EU Stormont parties have written to the British government and EU urging commitments on NI in the Brexit deal to be kept.

It comes after Downing Street said it will bring a new law that could change post-Brexit customs plans with the EU.

Sinn Féin, the SDLP, Alliance and the Greens said the UK and EU must ensure the “rigorous implementation” of the NI protocol.

Number 10 said it will only make “minor clarifications in specific areas”.

Political parties at Stormont are divided over the government’s plans, and held an emergency debate to discuss it when assembly members returned to the chamber on Monday for the first time following summer recess.

The joint letter from the leaders of the four parties, which all supported remain in the EU referendum, was published on Monday afternoon.

It states that while the NI Protocol was “imperfect”, it guaranteed in all circumstances that there would be no hard border between Northern Ireland and the Republic of Ireland.

“It is entirely unacceptable to the Northern Ireland parties that the UK Government would seek to abandon these safeguards and mitigations, which we believe would amount to a serious betrayal of an existing international treaty,” the letter adds.

“The economic and political impact on the island of Ireland, on the UK and above all on the people whom we represent would be devastating, and long-lasting.

“It would represent a shocking act of bad faith that would critically undermine the Good Friday Agreement political framework and peace process and the UK’s ability to secure other crucial deals to protect the Northern Ireland economy.”

The four parties call on the UK government to “honour its commitments” and ensure the protocol is implemented rigorously.

What is the Northern Ireland Protocol?

The Northern Ireland part of the Brexit deal, known as the Protocol, was agreed in October last year and is due to come into effect at the end of this year.

It is designed to prevent a hard border in Ireland – or even any new checks at the Irish border.

It does this by effectively keeping Northern Ireland in the EU’s single market for goods.

This will mean products entering Northern Ireland from the rest of the UK will be subject to new checks and control – the so-called Irish Sea border.

However, the precise nature of these checks needs to be agreed by the EU and UK and are being negotiated in parallel with the trade talks.

It will also mean when relevant EU laws are amended or new ones are drawn up,