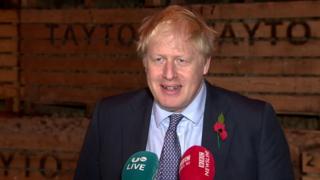 The Prime Minister has briefed Conservative party members in Northern Ireland on his Brexit deal.

A clip of the briefing has been widely shared on social media. So did Boris Johnson get all the details correct?

The Brexit deal has major implications for Northern Ireland.

The region will continue to follow many EU rules on food and other manufactured goods, while the rest of the UK will not.

Northern Ireland will still be part of the UK’s customs territory, but it will also continue to follow EU customs rules.

This is likely to mean new bureaucracy for trade between Northern Ireland and the rest of the UK.

Mr Johnson said: “There will not be checks on goods going from Northern Ireland to Great Britain.”

In 2017, it promised that Northern Ireland companies would continue to have “unfettered access” to the rest of the UK, no matter what the Brexit outcome.

The Brexit Secretary Stephen Barclay has previously said there would be “limited targeted interventions” on trade from Northern Ireland into Great Britain.

He said this would amount to the filing of an electronic form, involving “fairly straightforward data”.

The question then arises whether checks would ever have to be carried out to verify the accuracy of what is in the form.

The prime minister says no, but many trade experts are sceptical about whether a policy of no checks can be maintained in the long term.

However, the precise of details how it would all work are yet to be explained.

He said: “There will not be tariffs or checks on goods coming from GB to NI that are not going on to Ireland.”

This is highly unlikely – when it comes to checks.

The deal means that Northern Ireland will remain part of a ‘single regulatory zone’ with the Republic of Ireland, a zone which will apply EU rules.

The EU has particularly strict rules on the importation of “products of animal origin”, that is to say meat, fish and dairy products.

These products must enter the EU through a border inspection post where all shipments are subject to document checks and a high proportion are physically checked.

Products of animal origin from GB entering NI would be subject to these checks whether they are destined for Northern Ireland or the Republic of Ireland.