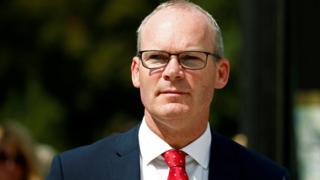 A no deal Brexit would be an “enormous failure of politics and diplomacy”, says Ireland’s foreign minister.

Trade negotiations between the UK and the EU will continue next week.

Prime Minister Boris Johnson has said both sides should “move on” if a deal cannot be made by the next European Council summit on 15 October.

The Brexit transition period, during which the UK has continued to trade freely with the EU, is due to end on 31 December.

Mr Coveney told Nick Robinson it was “surely it is in Britain’s interests” to have a “friendly” relationship with the EU, “as opposed to something that continues to drift away from the EU in isolation in the middle of the Atlantic”.

“That is not a future for Britain that I want as someone who cares about Britain,” he added.

One of the biggest challenges in the trade talks has been the status of goods going between Britain and Northern Ireland, which has a land border with the rest of the EU.