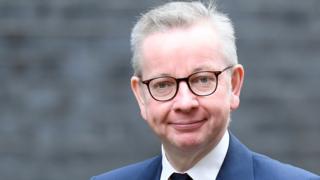 Michael Gove has said the European Union does not need a “mini embassy” in Belfast after the Brexit transition period.

The comments were made by the cabinet minister after the EU said it wanted a technical base in Northern Ireland.

The transition, sometimes called the implementation period, is due to last until 31 December 2020.

During this period, the UK will remain in both the EU customs union and single market.

The comments were made by Mr Gove as he gave evidence to a virtual meeting of the European Union committee.

The cross-party group of MPs is currently examining the UK’s future relationship with the EU.

Earlier, it was revealed Paymaster General Penny Mordaunt had written to Michel Barnier to reject the EU’s proposal for an EU Commission office.

The EU said the office was to help oversee the implementation of the Northern Ireland protocol after the end of the transition period.

In the letter, Ms Mordaunt said the UK “cannot agree” to the proposal.