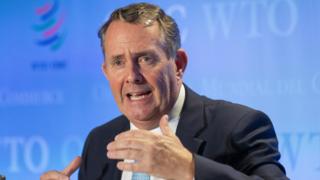 Liam Fox has downplayed the importance of Brexit in his bid to be the first British boss of the World Trade Organization.

The Leave-backing former cabinet minister said not every country “sees every issue through the Brexit prism”.

He also insisted it was not too early for a Briton to lead the WTO, following the UK’s EU exit in January.

The Tory MP is one of eight candidates vying to replace Brazilian Roberto Azevedo as director-general.

Candidates have until early September to drum up support among 164 member countries, who want to find consensus on a replacement by 7 November.

The WTO, which tries to help countries set global trading rules, has seen its main function of arbitrating trade disputes hobbled by a recent dispute with the US.

Mr Azevedo is due to stand down as director-general at the end of August, a year earlier than expected.

The contest to replace him comes at a crucial time for the Geneva-based body, amid a slump in global trade in the wake of the coronavirus pandemic.

Candidates have been setting out their stall to the WTO’s governing body since Wednesday, with Mr Fox the final nominee to do so on Friday morning.

The Conservative MP did not mention Brexit in his speech, in which he said skills and experience matter more than “where the new DG comes from”.

Speaking after his hearing, Mr Fox said the WTO needed an experienced politician – rather than a “technocrat” – to help it navigate “what is a very difficult time”.

Asked whether ongoing trade talks between the UK and EU would prove an advantage or obstacle to his bid, he replied: “Very fortunately, not everyone in the world sees every issue through the Brexit prism.”

“If I were to be elected the director-general… Britain would be one of 164 countries that would be looked after without fear or favour.

“In which case, the discussion between the United Kingdom and the European Union on Brexit would be a matter for those two parties.”

The UK has been a member of the WTO since it was founded in 1995, but has only sat as an independent member since its departure from the EU.

Asked whether this meant it was premature to expect a UK nominee to lead the body, Mr Fox replied: “I say that’s wrong”.

“We have long experience working with European partners and outside on a range of global issues,”