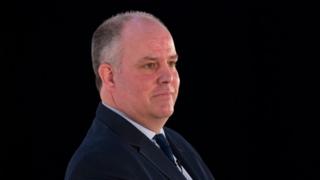 Failing to leave the European Union would be a “brutal betrayal of democracy”, the former Welsh Tory leader in the Senedd has said.

Andrew RT Davies added not delivering Brexit would pose a “real danger to the fabric of the United Kingdom”.

Prime Minister Boris Johnson said he plans to renegotiate Theresa May’s Brexit deal, but is committed to leaving on 31 October come what may.

Mr Davies said he was confident the UK would leave by the October deadline.

The EU would be to blame if the UK left without a deal, the South Wales Central AM said.

After Mr Johnson’s first speech as prime minister to MPs, the EU’s chief Brexit negotiator, Michel Barnier, sent a note to European leaders saying getting rid of the Irish backstop was “of course unacceptable”, and labelled Mr Johnson’s speech “rather combative”.

Mr Johnson has insisted the most controversial element of the UK-EU’s current Brexit deal – the Irish backstop to prevent a hard border between the Republic and Northern Ireland – must be removed, but the demand has been dismissed by officials in Brussels.

Speaking to BBC Radio Wales’ Sunday Supplement, Mr Davies said he still wanted the UK to leave the EU with a deal, but was prepared to accept a no-deal Brexit.

When asked if he believed the UK would leave th