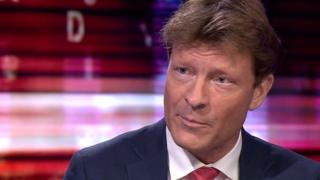 The Brexit Party has taken over the running of its first council in north-east England.

The Brexit Party said it had “put country before party”, also forming a coalition with three local Conservatives.

The council said the new group had replaced the Independent Union and Conservative Group.

Previously, the only council in England to have the Brexit Party as part of a governing coalition was Burnley.

Seven out of 10 people in Hartlepool voted Leave in the EU referendum.

In a statement, the Brexit Party said the “defectors” had attended a party conference in Sedgefield on Thursday and met party chairman Richard Tice.

It said the alliance was a blow to the Labour Party, which lost control of all five Tees Valley councils and dozens of seats in May.

Mr Tice said: “Regardless of the shenanigans in Westminster, Brexiteers in the North East are pushing to take back control so they can respect the Brexit vote.”

Hartlepool has long been a target for UKIP and now the Brexit Party in Westminster elections.

With 13 councillors the Brexit Party and Conservative coalition would be the biggest group in the 33 seat Hartlepool council.

Whilst the Brexit Party/Conservative alliance doesn’t have an overall majority on the council, and will require the support of other parties to pass decisions, the fact it is now the lead group on a local authority is a milestone for a political party that has only existed since the beginning of 2019.

Council leader Shane Moore told the Local Democracy Reporting Service he had left the independent group and joined the coalition.

“In a town like Hartlepool that overwhelming voted to leave the EU,