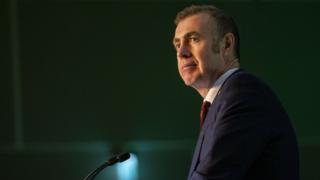 Plaid Cymru is now focused on making Brexit work for Wales “as best we can”, according to the party’s leader.

Adam Price said it had been in Wales’ best interests for Plaid to oppose the UK’s departure from the European Union in December’s general election.

But with the UK set to leave the EU on 31 January, he said there was no need to “fight yesterday’s battles”.

Mr Price added there could be “new freedoms and flexibilities” for Wales as a result of Brexit.

“There’s no point in us now rehearsing arguments of the past,” Mr Price said.

“The prime minister has his majority, he will implement the [Brexit] policy that he set out.

“It’s very important we minimise some of the negative effects that could have on the Welsh economy but also we need to reflect the fact that we’re in a different political context now and we need to look at making this work for Wales as best we can.

“There are, for example, some new freedoms and flexibilities as a result of leaving the European Union.

“Instead of all of those powers and levers remaining at Westminster then, we need to make the case for Wales to have those levers.”

In an interview on BBC Politics Wales, Mr Price outlined some of the demands he will make in a speech in Cardiff on Monday.

They include giving the Development Bank of Wales the ability to lend money without the constraints of the EU’s state aid rules and calling for the devolution of corporation tax, VAT and air passenger duty.

In last month’s election, Plaid Cymru retained the four seats they held before the campaign but failed to manage second place in any other Welsh seat and saw its share of the vote fall by 0.5%.