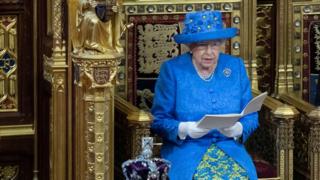 Measures to help the UK prosper after Brexit are to be set out in the Queen’s Speech, the government has said.

Plans to end the free movement of EU citizens into the UK and provide faster access to medicines will be unveiled.

Ministers say a Brexit deal is a “priority” and they hope one can be passed through Parliament “at pace”.

But the UK and EU are still involved in talks ahead of a key summit – with a Downing Street source saying they were “a long way from a final deal”.

The UK is due to leave the EU at 23:00 GMT on 31 October and the European leaders’ summit next Thursday and Friday is being seen as the last chance to agree any deal before that deadline.

About a dozen British officials, including the UK’s EU adviser David Frost, are taking part in what has been described as “intense technical discussions” at the EU Commission in Brussels this weekend in an attempt to secure a new Brexit deal.

A Downing Street source said: “We’ve always wanted a deal. It is good to see progress, but we will wait to see if this is a genuine breakthrough.

BBC political correspondent Nick Eardley said although the government had been enthused by progress in recent days, the message from the Number 10 source was to not get “carried away”.

Leader of the House Jacob Rees-Mogg appealed to Eurosceptic MPs to back Prime Minister Boris Johnson’s proposed Brexit deal by writing in the Sunday Telegraph that “compromise will inevitably be needed”.

Downing Street says the prime minister will update his cabinet on the progress of the talks in Brussels later on Sunday, starting the “preparations for a final, critical EU council where it is hoped a deal can be reached”.

Meanwhile, the first Queen’s Speech of Mr Johnson’s premiership, delivered during the State Opening of Parliament on Monday, will see the government highlight its priorities.

Mr Johnson said: “Getting Brexit done by 31 October is absolutely crucial, and we are continuing to work on an exit deal so we can move on to negotiating a future relationship based on free trade and friendly co-operation with our European friends.