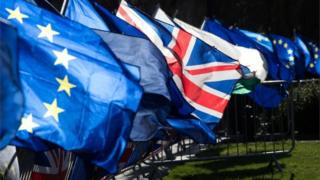 A Treasury spokesperson said the government had made “all necessary funds available” to ensure the country was prepared for leaving the EU.

But the Lib Dems claimed “billions of pounds have been thrown away in a bid to paper over the Tories’ Brexit mess”.

The NAO stressed in its report that it was not making a judgement on whether the spending represented value for money.

It also emphasised that the figures represented a “minimum estimated level of spend” due to “limitations” in the data provided by departments.

The spending watchdog’s report found that the Home Office, HM Revenue and Customs and the environment department accounted for more than half of the £4.4bn spent on Brexit preparations.

Of this money, at least £1.9bn was spent on staffing. The NAO said staffing levels peaked in October 2019 when 22,000 civil servants were working on Brexit planning.

Advertising, building new systems and other services cost at least £1.5bn – this included spending £283m to build the EU settlement scheme and £69m on Operation Brock, a traffic management system to be used in Kent in the event of a no-deal Brexit.

The £1.5bn also covered the £46m spent on the government’s “Get ready for Brexit” campaign. Earlier this year the NAO said it was “not clear that the campaign led to the public being significantly better prepared”.