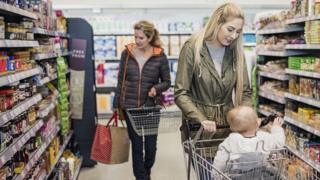 Businesses have warned that food prices may rise and jobs may be affected after the chancellor vowed to end alignment with EU rules after Brexit.

Sajid Javid told the Financial Times the UK would not be a “ruletaker” after Brexit, urging businesses to “adjust”.

The Food and Drink Federation said the proposals were likely to cause food prices to rise at the end of this year.

The Confederation of British Industry said for many firms, keeping existing EU rules would support jobs.

The automotive, food and drink and pharmaceutical industries all warned the government last year that moving away from key EU rules would be damaging.

In an interview with Financial Times, the chancellor said the Treasury would not support manufacturers that favour staying aligned with EU rules, as companies had known since 2016 that the UK was going to leave the EU.

“Admittedly they didn’t know the exact terms,” he said.

The UK’s 11-month transition period begins after it leaves the EU on 31 January.

Mr Javid declined to specify which EU rules he wanted to drop, but said some businesses would benefit from Brexit, while others would not.

Tim Rycroft, chief operating officer of the Food and Drink Federation, told BBC Radio 4’s Today programme that it sounded like the “death knell” for frictionless trade with the EU.

Acknowledging that some industries might benefit from Brexit, he said: “We also have to make sure the government clearly understands what the consequences will be for industries like ours if they go ahead and change our trading terms.”

The Confederation of British Industry (CBI) said it welcomed the chancellor’s “ambitious” vision but said the government should not feel an “obligation” to depart from EU rules.

Carolyn Fairbairn, CBI director-general, said for many companies, “particularly in some of the most deprived regions of the UK”, keeping the same rules would support jobs and maintain competitiveness.

The Society of Motor Manufacturers and Traders said the automotive industry in the UK and EU was “uniquely integrated” and its priority was to avoid “expensive tariffs and other ‘behind the border’ barriers”.

It said it was vital to have “early sight”