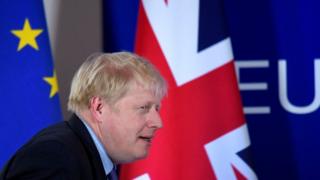 European Council President Charles Michel has said it is “time for the UK to put its cards on the table” over a post-Brexit trade deal.

He tweeted the comment after a call with UK Prime Minister Boris Johnson earlier on Wednesday.

Formal talks between the two sides ended last week, but officials are still trying to come to an agreement.

No 10 said, during the call, the PM had “reiterated that any deal must reflect what the British people voted for”.

Mr Johnson also said that “businesses and citizens needed certainty very soon on the terms of our future relationship”.

But the UK’s chief negotiator, Lord David Frost, said “big gaps” remained between the teams – namely on government subsidies for businesses and fishing rules – with fishing “the most difficult issue” left.

Both sides have said an agreement must be reached this month in order to be signed off before the end of the so-called transition period – where the UK has continued to follow EU rules while negotiations take place – on 31 December.

Speaking to a Lords Committee on Wednesday, Lord Frost stood by an earlier statement from the PM, which said the UK could walk away from negotiations if an agreement isn’t reached by 15 October.

If a deal is not in place by the end of the year, the UK will go on to trade with the EU on World Trade Organisation rules, which critics fear could damage the economy.