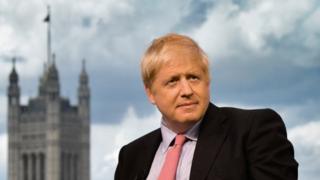 Boris Johnson’s approach to Brexit is “reckless”, Sinn Féin has said, after a leaked dossier warned of a hard border and food shortages if there is no deal.

The party’s deputy leader Michelle O’Neill accused the prime minister of treating the Northern Ireland peace process as “a commodity” in EU talks.

Ms O’Neill was responding to the leak which was reported in the Sunday Times.

“It comes from a time before Boris Johnson was prime minister, that’s the first thing to say,” Mrs Foster told BBC News NI.

“Secondly, it’s been leaked with the idea really to undermine the prime minister before he goes out to Europe and meets European leaders this week.”

The dossier obtained by the Sunday newspaper is a cross-government study on preparations for a no-deal Brexit, codenamed Operation Yellowhammer.

The dossier warns that the UK will face possible food, fuel and medicine shortages if it leaves the EU without a deal.

It also suggests that plans to avoid a hard border on the island of Ireland are unlikely to prove sustainable, and there could be months of disruption at UK ports.

Cabinet Minister Michael Gove, who is responsible for no-deal Brexit planning, tweeted on Sunday that Operation Yellowhammer is a “worst case scenario”.

He added that the government has taken “significant additional steps” over the past three weeks to ensure UK is prepared to leave on 31 October.

The prime minister has said the UK will leave the EU on that date “do or die”, accepting that a no-deal Brexit will happen if an agreement cannot be reached by then.

Later this week Mr Johnson is due to meet with EU leaders and is expected to reiterate that the UK will leave with or without a deal.