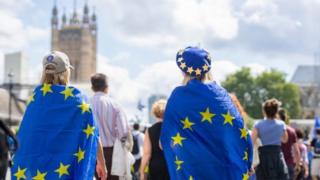 The country remains deeply divided over the likely impact of Brexit, but one clear winner has already emerged – politics departments at universities.

There has been a 28% surge in applications to politics courses since the debate about Europe took off in the run-up to the 2016 referendum.

Liverpool University has trebled the size of its politics department.

That trend is largely reflected at institutions across the country and the number of students accepted on to politics courses in the five years to 2018 rose by 27% to 7,990, according to UCAS.

Liverpool University politics lecturer Jon Tonge says that other dramatic political events, such as the Scottish independence referendum and the 2015 general election, have also boosted applications.

And the fierce, often toxic, nature of the debate on social media has also captured the attention of young people, he said.

“It is a terrible thing to say, but the more unhealthy and divisive the debate is, the better it is for politics departments in terms of bums on seats,” said Prof Tonge.

It is all a far cry from the Blair years, in the late 1990s and early 2000s, dubbed the “tranquil age of politics” by Prof Tonge, when “consensus” reigned and politics courses were “not recruiting in huge numbers”.

Christopher Massey, a lecturer at Teesside University, which has just launched a BA (Hons) course in politics, agrees that Brexit has had a big impact on student numbers but Donald Trump’s presidency and protest movements such as Extinction Rebellion have also played a part.

“You cannot avoid politics now – it has even ousted celebrity culture in the news headlines, as something that shapes their lives,” he says.

‘I enjoy the drama’

Ted Hollas and Harry Souter are A-level politics students at York College and both are hoping to study the subject at university.

Ted, 17, who describes himself as “right wing, but socially liberal”, said: “I hear people saying they are so bored with Brexit but I am really interested in it. I follow every twist of it in Parliament and I enjoy the drama.

“I would like a career in politics. I want to get try to get in there and make a difference.

“I imagine its is very intimidating, and a lot of pressure, but I am not going to let that put me off.”