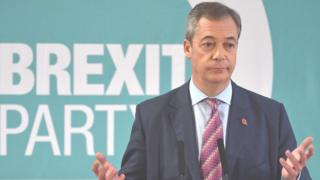 The Brexit Party outspent the Conservatives and Labour in the UK’s final elections to the European Parliament last year, figures show.

Despite barely campaigning at a national level, the Tories spent £2.6m according to the Electoral Commission.

The 73 MEPs elected last year ended up serving for just over eight months. They vacated their seats in the European Parliament on 31 January 2020, when the UK officially withdrew from the EU.

The 2019 election was controversial as it took place almost two months after the date on which the UK had been originally intended to leave the EU.

The poll saw the Brexit Party and the anti-Brexit Lib Dems gain at the expense of the Conservatives and Labour.

The Tories’ poor performance, the party’s worst in a UK-wide election on record, contributed to Theresa May’s decision to stand down as prime minister.

The UK’s largest political parties spent £11.4m on the campaign, according to the electoral watchdog – which has released information about campaign expenditure above £250,000.

The Independent Group for Change, the anti-Brexit party formed by ex-Labour and Tory MPs early in 2019, spent £886,681 on a campaign in which it