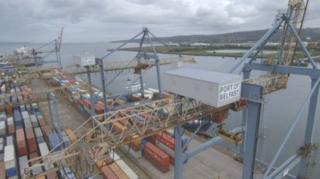 Northern Ireland’s Department of Finance was given £31.4m during the summer to help Stormont departments prepare for a no-deal Brexit.

The Treasury allocated the money from a pot of £2.1bn, announced on 1 August for no-deal preparations across the UK.

Stormont’s share was confirmed to SDLP deputy leader Nichola Mallon when she asked for a breakdown of the figures.

She expressed concern that a “huge sum” had been allocated by civil servants without input from MLAs.

Ms Mallon told BBC News NI the money would have been better spent on employing more nurses and building more housing and she accused Prime Minister Boris Johnson of “reckless and dangerous” tactics on Brexit.

She added that the spending plans “threw up significant questions” about the government’s plan for borders if there is no deal with the EU.

Where is the money going if there is no deal?

More than a quarter – £8m – of Stormont’s extra £31m has been set aside for capital spending on roads and port infrastructure.

Almost £6m of it has been allocated to the Department of Agriculture, Environment and Rural Affairs (DAERA) for “trade, inspection, legislation and policy staffing”.

A further £3m has been allocated for capital spending on “vehicle parks” in Northern Ireland although there are no details about locations.

New signage, CCTV and “communication equipment” will cost £2.3m, according to the figures.

The majority of the cash has been split between two departments – DAERA and the Department for Infrastructure.

The Department of Finance initially planned to hold back £2m in reserve to deal with what it called “emerging pressures”.

The public transport company Translink has been allocated £600,000 for cross-border contingency planning while Northern Ireland Water, which manages the water and sewerage infrastructure, is in line for £2.2m for “maximising chemical stock levels”.

However, almost half of that £2m – £800,000 – has since been allocated to the Department of Health to cope with potential “medicines shortage and medical device shortage”.

The most intriguing items in these budget documents are the capital spending commitments for roads, vehicle parks and CCTV.

That is exactly the sort of infrastructure the government says it won’t be building at the border, even if there is no deal.

So perhaps it’s money that will be directed towards the Irish Sea ports.