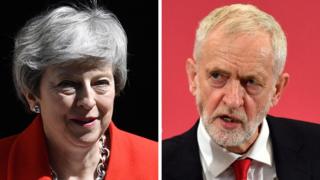 Brexit talks between the Conservatives and Labour are about to close without an agreement, the BBC has learned.

Theresa May and Jeremy Corbyn will now move to a second phase, aimed at agreeing on a process for Parliamentary votes designed to find a consensus.

It comes after Mrs May promised to set a timetable for leaving Downing Street following the next Brexit vote in June.

Ex-Foreign Secretary Boris Johnson has said he will stand in the Conservative leadership election that will follow.

The UK was due to leave the EU on 29 March but the deadline was pushed back to 31 October after MPs rejected Mrs May’s proposed deal – the withdrawal agreement that was negotiated with the EU – three times.

That prompted attempts to find a way to end the impasse through cross-party talks between Labour and the Conservatives.

But BBC Newsnight political editor Nicholas Watt said Tory whips had given up hope of finding agreement with the Labour leader on a Brexit deal.

He said on the other side of the negotiating table “Labour has fears about the durability of a deal agreed with a weak prime minister”.

At the shadow cabinet meeting on Tuesday, some Labour frontbenchers called for an immediate halt to the talks, raising questions over whether Mr Corbyn could win approval from his party for any deal.

Labour negotiators have been seeking a permanent and comprehensive customs union with the EU after Brexit, meaning that there will be no internal tariffs (taxes) on goods sold between the UK and the rest of the bloc.

But many Brexit-supporting Tory MPs want the UK to negotiate its own trade deals on goods with other countries around the world, which would be impossible with a customs union in place.

The prospect of compromising on issues such as this in the prime minister’s talks with Labour has provoked anger in the Conservative parliamentary party.