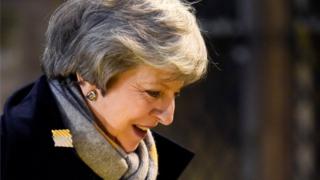 Theresa May has responded to Jeremy Corbyn’s letter setting out his five demands for a Brexit deal.

The prime minister queried his call for the UK to stay in a customs union with the EU – but welcomed more talks with Labour on a Brexit agreement.

Mrs May wants the two parties to discuss how “alternative arrangements” to the Irish backstop – a commitment to avoid a hard border – could work.

She did not reject any of his conditions outright in her reply.

Writing her response to his letter of last Wednesday, Mrs May told the Labour leader: “It is good to see that we agree that the UK should leave the European Union with a deal and that the urgent task at hand is to find a deal that honours our commitments to the people of Northern Ireland, can command support in Parliament and can be negotiated with the EU – not to seek an election or second referendum.”

This is despite Mr Corbyn repeatedly saying there should be a general election if Mrs May cannot get a deal through Parliament. He has also faced pressure from some of his MPs to push for another public vote on Brexit.

However, BBC political correspondent Iain Watson said it appears there are some potential stumbling blocks to a deal.

Labour has asked for “a permanent and comprehensive UK-wide customs union” with the EU, with the same external tariff. It would give the UK a say on any future trade deals that the EU may strike.

Mrs May does not agree, and wrote: “I am not clear why you believe it would be preferable to seek a say in future EU trade deals rather than the ability to strike our own deals?”

The existing Political Declaration, setting out the goals for the future relationship between the UK and the EU, “explicitly provides for the benefits of a customs union – no tariffs, fees, charges or quantitative restrictions across all sectors and no checks on rules of origin”, Mrs May told Mr Corbyn.

It also recognises the development of the UK’s independent trade policy, she added.

Mrs May said securing frictionless trade for goods was “one of our key negotiating objectives”.

She added: “The fundamental negotiating challenge here is the EU’s position that completely frictionless trade is only possible if the UK stays in the single market.