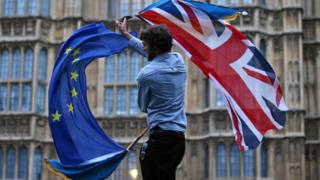 Senior Tory MP Sir Oliver Letwin has said he does not support Jeremy Corbyn becoming a caretaker prime minister in a bid to avoid a no-deal Brexit.

But he backed discussions across the Commons to prevent the UK crashing out of the EU without a deal.

Prime Minister Boris Johnson has pledged that the UK will leave the EU by 31 October “do or die”.

Mr Corbyn’s current plan is to win a no-confidence vote in the government and become interim prime minister.

He then wants to delay Brexit, call a snap election, and campaign for another referendum.

Sir Oliver, who was among senior Tories who received a letter from Mr Corbyn about the plan, was asked about Mr Corbyn’s proposal on BBC Radio 4’s Today programme.

“That appears to be his agenda. I have to say it is not one I personally share,” he said.

“I don’t think it’s at all likely that a majority would be formed for that and I personally wouldn’t want to vote for it. I wouldn’t be able to support that, no.”

Sir Oliver, a former cabinet minister, has led several attempts in Parliament to break the Brexit impasse and prevent a no-deal Brexit.

But he said he was “not very inclined” to help bring down the government in a no-confidence vote and would “rule it out” if it led to Jeremy Corbyn becoming prime minister.

His comments came amid an ongoing row among MPs who oppose no deal, with Liberal Democrat leader Jo Swinson initially dismissing Mr Corbyn’s plan as a “nonsense”.

Anna Soubry, leader of the Independent Group, said she would also “not support nor facilitate any government led by Jeremy Corbyn”.

But the head of the SNP, Nicola Sturgeon, was among those applying pressure to Ms Swinson to change her stance.

Mr Clarke responded on Friday said he was willing to lead a government of national unity to avoid a no-deal Brexit.

Sir Oliver suggested the majority of MPs did not want a no-deal Brexit, although he said he was “not terribly optimistic” they would reach an agreement.

The former minister, who has agreed to meet with Mr Corbyn to discuss plans to avoid a no deal,