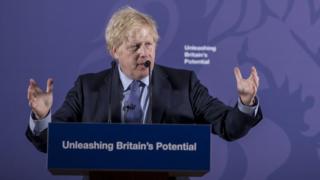 Trade negotiations tend not to begin with two sides in agreement – otherwise there would be nothing to negotiate.

So it’s not surprising to see the UK and EU set out rather different positions before talks begin in earnest.

In fact, the two sides agree they want a free-trade agreement, with no tariffs (border taxes on goods) or quotas (limits on the amount of goods). They are also keen to include as much of the service sector as possible.

But that’s the easy bit and this is likely to become a bruising experience for all involved.

Terms and conditions always apply and the EU says it has two main conditions.

First and foremost, the EU wants the UK to sign up to strict rules on fair and open competition so if British companies are given tariff-free access to the EU market, they cannot undercut their rivals.

These are known as level-playing-field guarantees and they have been a constant theme in the EU’s negotiating position for nearly two years.

Most importantly, its draft negotiating mandate says a future partnership must “ensure the application” in the UK of EU state-aid rules on subsidies for business.

The UK would also be required to stay in line with the EU’s rules on environmental policy and workers’ rights.

But Boris Johnson has publicly ruled out any such commitment and said he would create an independent system that would uphold the UK’s international obligations and not undermine European standards.

“There is no need for a free-trade agreement to involve accepting EU rules on competition policy, subsidies, social protection, the environment or anything similar,” Mr Johnson said in his speech in London.

He also pointed out the UK spent far less money on state aid than Germany or France.

The EU says without a level playing field, it cannot offer any kind of basic free-trade agreement along the lines of the one it has negotiated with Canada.

The UK’s response? A Canada-style deal would be its preference. But if that is not available, it will settle for what Australia has with the EU. In other words, no free-trade deal at all.

Either way, says Mr Johnson, a new relationship will begin on 1 January.

His critics accuse him of recklessness but the prime minister says he has “no doubt that in either case the UK will prosper”.