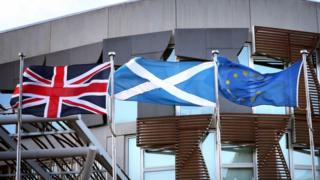 Billions of pounds could be wiped off Scotland’s economy without an extension to the Brexit transition period, according to the Scottish government.

The transition period, due to end on 31 December, can be extended by up to two years if agreed by the end of June.

The UK government has said it has no intention of doing so, and needs “flexibility” to deal with coronavirus.

While the UK left the EU on 31 January the transition period left most arrangements in place – including Britain’s membership of the customs union and single market – until the end of the year while a trade deal was negotiated.

A fourth round of talks has begun but there is little sign of any breakthrough with both sides sticking to their positions.

The Scottish government said the coronavirus pandemic and left businesses in a fragile state, and the outbreak had affected preparations for the new trading relationship.

Its modelling suggests that a basic free trade agreement or no-deal – rather than an extension – could result in a cumulative loss of economic activity of between nearly £2bn and £3bn over the two years.

The Scottish government’s Cabinet Secretary for Constitution, Europe and External Affairs, Mike Russell, said the study showed it was “essential” to seek an extension, and not to do so would be an “act of extraordinary recklessness”.

He added: “I believe there is a growing common-sense coalition to press for an extension to avoid such a disastrous outcome and the needless