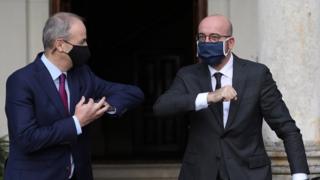 The UK needs to take “significant steps” in the coming days to secure a trade deal with the EU, the European Council president has said.

Charles Michel said talks were approaching a “moment of truth” ahead of a crucial EU summit next week.

EU chief negotiator Michel Barnier is due to meet his UK counterpart for informal talks on Friday.

The UK’s post-Brexit transition period, during which the trading relationship between the two sides has remained the same, is due to end in December.

PM Boris Johnson has previously said both sides should “move on” if a deal cannot be agreed between them by the time of the EU leaders’ summit, which begins on 15 October.

Speaking after meeting Mr Martin in Dublin, Mr Michel said some progress in talks had been made recently in areas such as energy policy and the trade in goods.

But he added the UK side needed to take “significant steps” in other areas, such as fishing rights and so-called state aid rules limiting government support for businesses.

“The coming days are crucial,” he added.

Asked whether he was more optimistic a deal could be reached, Mr Martin said “the mood appears to have changed, and there’s been more intensified engagemen