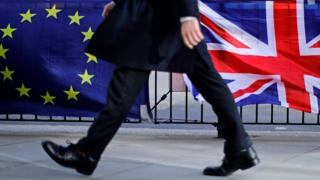 Talks between the UK and EU over a post-Brexit trade deal will enter their third round later, ahead of a decisive summit next month.

Both sides are due to decide by the end of June whether the current deadline for negotiating an agreement should be extended beyond the end of December.

The UK has said it will not agree to an extension, even if the EU requests one.

The latest round of talks, to be held via video link, will end on Friday.

After the latest round in April, EU chief negotiator Michel Barnier said progress had been disappointing, whilst the UK said only “limited progress” had been made.

There are differences between the two sides on fisheries, competition rules, police co-operation, and how a deal would be enforced.

BBC Europe Editor Katya Adler said the EU accuses the UK of concentrating on its priorities whilst going slow on issues more important to the 27-member bloc.

She added that the UK wants to first settle a core trade deal alongside deals on aviation and energy, whilst the EU is keen to focus on fishing quotas and competition rules.

She added that although the UK has ruled out extending the talks, leaving tricky areas to the autumn could be risky if coronavirus infections peak again.

Negotiations have been held using video-conferencing technology since last month after face-to-face meetings were cancelled due to the pandemic.

The UK has rejected the suggestion it is not engaging in all negotiating areas, accusing the EU of making demands not required of its other trade partners.

The UK is currently in a transition period under which it must follow most EU regulations, following its legal withdrawal from the bloc on 31 January.