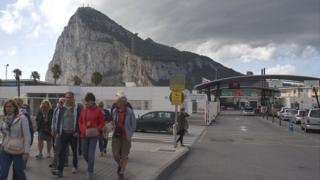 The UK government says Gibraltar cannot negotiate a separate deal with the EU on passport-free travel after Brexit.

On Friday, Chief Minister of Gibraltar Fabian Picardo said joining the EU’s Schengen zone would be advantageous for the tiny UK territory.

All but six EU member states are in Schengen, enabling citizens to travel passport-free across borders in the EU.

A UK government spokesperson said Gibraltar’s arrangements would be part of UK-EU talks on future relations.

Maintaining ease of movement across borders will be part of those negotiations after Brexit, which is scheduled for 31 January, the spokesperson said, pointing to the UK-EU Political Declaration on future ties.

About 15,000 people enter Gibraltar daily from Spain for work, and Brexit has fuelled concern that there could be expensive delays as passports are examined at the border. The border is only 1.8km (one mile) long.

Curbing freedom of movement is a core issue in the UK’s exit from the EU, with the UK government determined to lower immigration from the EU.

“After we leave, the UK will be negotiating the future relationship with the EU on behalf of the whole UK family, including Gibraltar. Working closely together, the UK and Gibraltar Governments have always supported arrangements at the border with Spain which promote fluidity and shared prosperity in the region,” the UK spokesperson said.

“The UK, including Gibraltar, is not part of the borderless Schengen zone.”

A UK-Gibraltar Concordat, agreed in 2018, noted the Rock’s “specific situation” and pledged that “particular regard will be had… to the mobility of persons and in the services economy”.

Speaking to the AFP news agency on Friday, Mr Picardo said: “We talked about this issue before Brexit… about Gibraltar becoming part of the Schengen zone.

“If you look at other microstates in Europe, they take the benefit of common travel areas with Schengen, even if they’re not entirely part of the Schengen information system,” he said.

Liechtenstein is one such tiny state, which is in Schengen but not in the EU.

“There is the ability to move fluidly between the territories of the EU and these microstates,” Mr Picardo said.

“All of these things will be considered in the context of the negotiations going forward.”