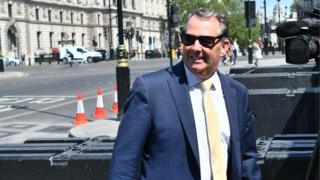 The UK government is set to nominate former cabinet minister Liam Fox as a candidate to lead the World Trade Organization, the BBC understands.

The body is searching for a new director-general to replace Brazilian Roberto Azevedo, who is standing down on 31 August.

Six countries so far have confirmed they will put forward a nominee.

Mr Fox, a Conservative MP since 1992, was an ardent backer of the UK’s exit from the EU.

His nomination by Downing Street would come as a blow to former Labour cabinet minister Lord Mandelson, who has also expressed an interest in the role.

WTO member countries have until 17.00 BST on Wednesday to nominate candidates, with voting set to begin later this year.

The contest comes at a crucial time for the WTO, amid a slump in global trade in the wake of the coronavirus pandemic.

The Geneva-based body, established in 1995, provides a forum for its 164 members to administer a system of rules governing global trade.

Recently however the body has seen one of its main functions, arbitrating trade disputes, hobbled by a dispute with the United States.

President Donald Trump’s administration has blocked the appointment of new judges, arguing that the WTO has long treated the US unfairly.

Despite being a Brexiteer who wants to see the UK embrace what he sees as the opportunity of signing new trade deals from next year, Liam Fox was sacked immediately by Boris Johnson when he became PM.

But it now seems the PM thinks Mr Fox could be the man to fight for his vision of global free trade.

Mr Fox’s supporters have spoken of the need for a “political leader” at the WTO – and point to his connections with many influential Republicans in Washington.

He’s not the frontrunner. Many countries are expecting an African leader of the organisation – with the favourite from Nigeria at the moment.

Mr Fox will join a field of candidates including Kenya’s culture minister Amina Mohamed, who became the latest to confirm her candidacy