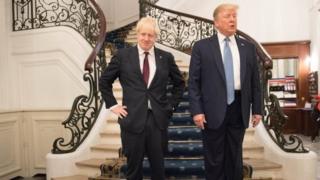 Boris Johnson has promised to “drive a hard bargain” as he set out the UK’s negotiating position for a post-Brexit free trade deal with the US.

The government said a deal would boost the UK economy by £3.4bn and particularly benefit Scotland, England’s north-east and the Midlands.

It pledged to maintain high food standards and said the NHS would not be for sale.

But a union leader has warned against the UK “cosying up to Donald Trump”.

It comes as UK-EU talks aimed at reaching a trade agreement formally kick off on Monday in Brussels.

The talks on a free trade agreement with the US are expected to begin later this month.

The discussions will take place in both the UK and US and be overseen by the government’s chief negotiation adviser Crawford Falconer – formerly New Zealand’s chief negotiator and ambassador to the World Trade Organization.

A government statement said manufacturers of ceramics, cars, food and drink would be “the biggest winners” from a deal, along with the professional services, including architects and lawyers.

In what appears to be a bid to push back against accusations made by Labour during the election that the health service would be up for sale under the Conservatives, the government also said any future deal “must protect our NHS”.

“Trading Scottish smoked salmon for Stetson hats, we will deliver lower prices and more choice for our shoppers.”

International Trade Secretary Liz Truss said: “This deal with our biggest single trading partner will cut red tape for our small businesses, cut tariffs for our great products from dairy to cars and increase growth in all four nations.”

Confederation of British Industries director general Carolyn Fairbairn said it was “encouraging to see the government’s ambitions to make it easier for skilled people to move between the UK and US” and “support small business exporters”.

However, Frances O’Grady, general secretary of the Trade Unions Congress, said: “The government should be focused on getting a good trade deal with the EU – not cosying up to Donald Trump.”

She said a bad trade deal with the US would “put working people’s jobs and rights on the line… and it will undermine our vital public services, environment and food standards”.

Ms O’Grady referred to fears from farming leaders that an agreement could see the import of food that would be illegal to produce in the UK,