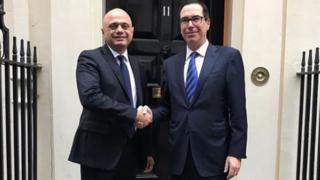 The US wants to agree a post-Brexit trade deal with the UK this year, the country’s treasury secretary has said.

After meeting Chancellor Sajid Javid in London, Steve Mnuchin said he believed the UK could negotiate trade deals with the US and EU at the same time.

After Brexit happens on 31 January, the UK will be free to negotiate and sign new trade deals with countries with no existing EU deals – like the US.

At the same time, the UK will also be negotiating a free trade deal with the EU to ensure that UK goods are not subject to tariffs and other trade barriers once the Brexit transition period ends on 31 December.

Mr Mnuchin, who met Mr Javid for breakfast on Saturday morning and posted an image of them on Instagram, said the US was “prepared to dedicate a lot of resources” to securing a trade deal with the UK this year.

He said: “We’ve said that our goal – your goal – is trying to get both of these trade agreements done this year. And I think from a US standpoint we are prepared to dedicate a lot of resources.

“If the UK and US have very similar economies with a big focus on services, and I think this will be a very important relationship.”

Mr Mnuchin added President Donald Trump had previously said the UK would “be at the top of the list” for a deal.

He also reiterated the US’s objections to a new tax on the revenues of big tech firms, calling it “discriminatory”.

He told the audience at Chatham House it was “not appropriate” and has “violations to our tax treaties and other issues”.

“So, we’re working through that and I think we have a good outcome of trying to give some room now in 2020 to continue these discussions.”

Mr Javid intends to introduce a 2% levy on the revenues of search engines, social media platforms and online marketpl