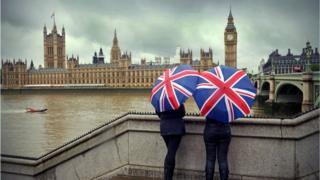 The UK formally leaves the European Union (EU) at 23:00 on Friday, 31 January. But it will immediately enter an 11-month transition period.

During the transition the UK will continue to obey EU rules and pay money to the EU. Most things will stay the same but there will be some changes:

Familiar faces such as Nigel Farage and Ann Widdecombe are among the UK’s 73 MEPs who will automatically lose their seats in the European Parliament.

That’s because, at the moment of Brexit, the UK will leave all of the EU’s political institutions and agencies.

However, in addition to the UK following EU rules during the transition period, the European Court of Justice will continue to have the final say over legal disputes.

UK Prime Minister Boris Johnson will have to be specially invited if he wants to join other leaders at EU Council summits in the future.

3. We will be hearing a lot about trade

The UK will be able to start talking to countries around the world about setting new rules for buying and selling goods and services.

It has not been allowed to hold formal trade negotiations with countries like the US and Australia while it remained an EU member. Brexit supporters argue that having the freedom to set its own trade policy will boost the UK’s economy.

There’s also a lot to be discussed with the EU. Agreeing a UK-EU trade deal is a top priority, so extra charges on goods and other trade barriers aren’t needed when the transition ends.

If any trade deals are reached, they won’t be able to start until the transition period ends.

4. The UK’s passports will change colour

Blue passports will be making a return, more than 30 years after they were replaced by the current burgundy design.

Announcing the change in 2017, then Immigration Minister, Brandon Lewis, praised the return to the “iconic” blue-and-gold design, first used in 1921.

The new colour will be phased in over a number of months, with all new passports issued in blue by the middle of the year.

Existing burgundy passports will continue to be valid.