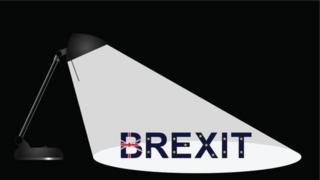 The government has effectively set a deadline of December 2020 to reach a trade deal with the EU.

Does that mean a no-deal Brexit is back on the table?

No-deal or no-trade-deal? What’s the difference?

It’s important to remember that Brexit consists of two deals, one on the withdrawal and one on the future relationship between the UK and the EU.

No-deal Brexit has come to be understood as the UK leaving the EU without a withdrawal deal.

The major fear in Northern Ireland was that no-deal would have meant the hardening of the land border.

However, a withdrawal deal was reached in October and the new government is now moving quickly to get that deal through Parliament.

It will also have to be ratified by the European Parliament.

Once those formalities are complete, the deal will be fixed in law and no-deal will be definitively off the table.

The deal guarantees no hardening of the land border in Ireland but will mean some new checks and controls at Irish Sea ports as a result.

It also includes an agreement on citizens’ rights and a financial settlement.

So why are some people still talking about no-deal next year?

They are talking about the next phase of the Brexit process.

That will be a new negotiation between the EU and the UK to finalise their long-term trading and security relationship.

This is a deal that the prime minister is confident can be done in a year.

But it is possible that such a deal won’t be reached in the time allowed.

So there is the risk that the EU and Great Britain would end up trading on World Trade Organisation terms in January 2021.

That would mean tariffs on goods, high tariffs in particular on agricultural goods and cars.

Think of it as a no-trade-deal Brexit rather than a pure no-deal Brexit.

Image copyright Getty Images Image caption In a no-trade-deal Brexit, there would not be a hard land border in Ireland but it would guarantee significant trade barriers between NI and the rest of the UK
What would that mean for Northern Ireland?

A no-trade-deal Brexit would affect Northern Ireland and the rest of the UK in very different ways.

England, Scotland and Wales would face tariffs and other trade barriers with the EU.

Northern Ireland would not. That’s because the withdrawal deal guarantees frictionless trade with the Republic of Ireland and by extension the EU.