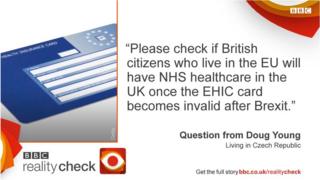 We were asked by Doug Young, a British citizen who lives in the Czech Republic, if British citizens who live in the European Union (EU) would have NHS healthcare when visiting the UK, once the European Health Insurance card (EHIC) becomes invalid after Brexit.

The number of UK-born people living in the EU – workers and their dependants, pensioners, students and others – is estimated at 1.3 million.

The EHIC card would no longer be valid if there was a no-deal Brexit.

The short answer to Doug’s question is: some British citizens in the EU would still get free NHS healthcare if this were to happen – and some would not.

What are their rights now?

All UK citizens in the EU are entitled to state-provided healthcare in the country they live, on the same terms as the nationals of that country.

They are also all entitled to a European Health Insurance Card (EHIC), which enables them to use state-provided emergency medical treatment if they travel to another EU country (or Switzerland, Norway, Iceland and Liechtenstein, where the scheme also applies). The EHIC covers pre-existing medical conditions and routine maternity care as well.

If you are a UK citizen and permanently resident in the EU, you need this card to access NHS treatment for free.

There are exemptions to this though:

These groups don’t need an EHIC card for free NHS treatment in the UK.

Image copyright PA Image caption The EHIC covers routine maternity service and pre-existing conditions as well as emergencies
What does the government say?

If there’s a no-deal Brexit, your EHIC card will no longer be valid.

So, what about those existing rights to free NHS treatment?

The government says that if you are a UK pensioner, student or posted worker in the EU, your rights would not change.

A Department of Health and Social Care official said: “We want to reassure UK nationals living in the EU whose healthcare costs are currently met by the UK government that they will be able to use NHS services for free in the same way as they do now.”

But, when it comes to UK citizens in the EU who rely on the EHIC card for free NHS treatment – their rights would not be protected. The UK government website, updated on 28 August 2019, says: “You should not expect to be able to use NHS services for free when visiting the UK.