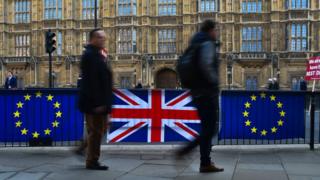 The government is aiming to secure a “zero tariff, zero quota” free trade deal with the EU, Brexit Secretary Stephen Barclay has said.

He told the BBC’s Andrew Marr the UK would not diverge from current EU trade regulations “for the sake of it”.

Mr Barclay added the government’s objectives for the trade talks would be published after Brexit on 31 January.

Prime Minister Boris Johnson will make a speech next month setting out more details, he said.

Mr Barclay’s comments come after the US treasury secretary said his country wants to agree to a post-Brexit trade deal with the UK this year.

After Brexit happens at 23:00 GMT on Friday, the UK will be free to negotiate and sign new trade deals with countries with no existing EU deals – like the US.

The UK then enters into an agreed transition period with the EU, which lasts until 31 December 2020. During this time the UK will aim to negotiate a free trade deal with the EU to ensure that UK goods are not subject to tariffs and other trade barriers.

Speaking to the BBC’s Andrew Marr, Mr Barclay said: “We are going to publish our objectives for the negotiation and we will set that out in due course after the 31st.

“The key issue is that we will have control of our rules, we will not be a rule-taker, we will not diverge for the sake of diverging.

“We start from a position of alignment but the key opportunity is that we will be able to set our standards, high standards, on worker’s rights, on the environment, on state aid as part of that trade policy.”

He said “both sides are committed” to securing a trade deal by the end of December, adding: “It’s in both side’s interests to keep the flow of goods going.”

Irish minister for European affairs, Helen McEntee, told Sophy Ridge on Sky News that “Brexit is really only at half-time, we have a huge amount of work still to do”.

“However, the idea that we can negotiate a trade deal with one that is comprehensive, one that provides very little change for our citizens, not just in the UK and Ireland, but the EU as well, within about a 12-month space, it’s very difficult.”