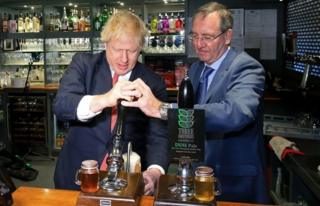 The Conservative Party and trade unions have a history of troubled relations. But one Tory MP thinks they can work together for the good of each other – and the country.

They’re not words one would expect from a self-described “tribal” Conservative MP who, growing up, saw his party’s leadership engage in a year-long battle – which sometimes turned violent – against the National Union of Mineworkers (NUM).

The miners’ strike of 1984-5 was the bitterest industrial dispute in recent UK history. The NUM’s eventual defeat, and the subsequent closure of the UK’s deep coalmines meant that, for many trade unionists, Tories became hate figures.

Margaret Thatcher, prime minister at the time, branded striking miners’ leaders part of the “enemy within”.

So how are relations between Tories and unions these days?

“The problem is there’s always a Pavlov’s dog reaction on both sides,” says Mr Halfon. “You mention Tories to trade unions and they say ‘no way.’ And, on the Tory side, mention unions and they just think of strikes and pickets. And trade unionism is much bigger than that.”

Mr Halfon, honorary president of the Conservatives’ Union Blue group, wants his party to change its pitch to potential members. Like some unions, it should offer perks such as private healthcare and travel discounts, legal representation, and better access to loans and insurance, he argues.

“It can’t be gimmicks,” Mr Halfon, MP for Harlow, in Essex, says. “People aren’t going to join for a Nando’s card. This is revolutionary for the Conservative Party and it would be a very, very different model of membership.

“Nowadays you can join the party by the internet, which is great. But what do you get for joining? Absolutely nothing, apart from letters asking for money and voting in a leadership contest or for a candidate.”

But there is one perk common to Conservative and Working Men’s Clubs, he says.

“They’re very good because you can actually get a pint of Guinness for a very decent price.”

At December’s general election, Boris Johnson’s party made incursions into areas where Labour – and unions – once dominated political life. The County Durham seats of Bishop Auckland and Sedgefield, formerly held by Tony Blair, were among those that turned blue.

Support for Brexit and Mr Johnson’s promise to “get it done” is cited as a major cause. After his election win, the prime minister acknowledged that many lifelong Labour voters had “lent”