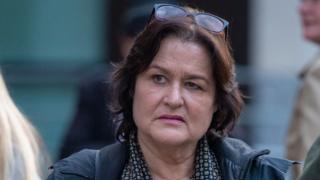 An election candidate standing in the same seat as Anna Soubry has been found guilty of harassing her and banned from campaigning in the constituency.

Westminster Magistrates’ Court heard the defendant repeatedly targeted the Independent Group for Change candidate and called her a traitor on television.

She will be sentenced on 16 December.

The court heard Dalla Mura, from Hove, attended an event in Parliament on 23 January where Ms Soubry was speaking, repeatedly interrupting her and live streaming the event on her phone. The meeting was eventually abandoned when she refused to stop.

The court was also told Dalla Mura approached Ms Soubry in Parliament’s Central Lobby while she was appearing on BBC Newsnight on 14 March, calling her a “traitor” while again filming her.

Passing the verdict, chief magistrate Emma Arbuthnot described Dalla Mura’s behaviour as “oppressive and unacceptable”, with conduct “driven by anger at Ms Soubry’s political views on Brexit”. She said it had also “caused harassment in the sense of alarm and distress”.

The 56-year-old will be sentenced four days after the election but will still be allowed to stand.

However, as a condition of bail, she cannot enter Broxtowe and has be