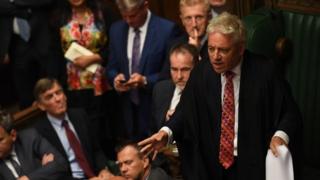 The nine MPs vying to replace John Bercow as Commons Speaker have been quizzed by journalists at Westminster.

Mr Bercow – who has held the office since 2009 – is standing down on 31 October, with MPs to elect his replacement on 4 November.

Several Tory candidates accused Mr Bercow of being biased – something he has always denied.

One hopeful, deputy Speaker Sir Lindsay Hoyle, suggested there was a drugs problem in Parliament.

Questioned on whether there was an issue with alcohol at Westminster, Mr Hoyle said: “It’s not just drink we’ve got to catch out, there is a drug problem, and I genuinely believe that counselling and real support should be available for all staff and members.”

“I don’t believe that somebody who walks in here may not be tempted into drugs, and what I’m saying is that we should have health and wellbeing in place for drink and drug counselling and real support for anybody.”

The candidates were quizzed about impartiality, and what they would bring to the role, at the two-hour hustings event.

Conservative MP Sir Edward Leigh said Mr Bercow was “perceived by a large part of the nation not to be impartial”.

He said the next Speaker needed to be “more in the mould” of Betty Boothroyd, the former Labour MP who held the position between 1992 and 2000, and who this week celebrated her 90th birthday.

His Conservative colleague, Shailesh Vara, said he believed Mr Bercow had “tarnished the role of Speaker with his biasness”, and described him as a “verbal playground bully”.

He said he wanted to be the first Speaker from an ethnic minority, adding that it would send “a powerful message to every single child in this country – black, white, brown, boy, girl” that if “that bloke Vara can make it, then so can I”.

Labour MP Harriet Harman said the role of Speaker was to be the “champion of Parliament in our parliamentary democracy”, and electing a woman would show Parliament was “no longer an old boys’ club”.

The Speaker election was taking place at “a really critical and challenging time for Parliament” and there “needs to be a strong Speaker in the chair”,