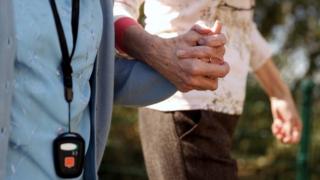 Care homes could face a staffing “black hole” because of the impact of the government’s immigration bill, care leaders have warned.

The Cavendish Coalition – which represents UK health and social care groups – says it is gravely concerned.

The current proposals would not allow enough overseas workers to be recruited, it has warned.

The government said immigration is “not the answer to the challenges in the social care sector”.

Leaders of 37 national care organisations, including the NHS Confederation, have signed the letter to the prime minister.

They say the proposed post-Brexit bill could have a damaging effect on care homes and other social care services, especially as the nation heads towards winter – which could bring further challenges due to the coronavirus pandemic.

The Immigration Bill, which has been given initial approval by MPs, repeals EU freedom of movement and introduces a new framework for who can come to live in the UK.

The legislation will put EU and European Economic Area (EEA) citizens on an equal footing to immigrants from outside the bloc.

It also paves the way for the government to introduce a new points-based system.

But the Cavendish Coalition said this points-based system currently does not include social care as the roles do not pass the proposed minimum salary threshold and “are not classed as a shortage occupation”.

One in six workers in the sector is a foreign national and earn on average between £16,400 and £18,400 in England, says the coalition. But from next January, under the new bill, foreign workers will have to be on a minimum of £25,000 to be allowed in to the UK.

Danny Mortimer, co-convenor of the Cavendish Coalition and chief executive of NHS Employers, said: “If adult social care wasn’t in a precarious position be