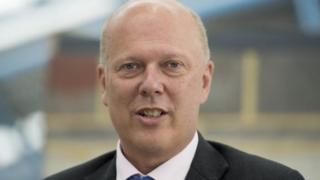 Ex-Transport Secretary Chris Grayling has landed a £100,000 job advising the owner of some of the UK’s top ports.

The Conservative MP is working for Hutchison Ports, which operates Harwich and Felixstowe among other terminals.

According to the MPs’ register of financial interests, he will be paid for seven hours work a week for a year.

The appointment has been approved by a Whitehall watchdog despite it raising concerns of a “perceived risk” that it may give the firm an unfair advantage.

The Advisory Committee on Business Appointments said Mr Grayling had reassured them he would not be advising the company on its commercial maritime activities or risks and opportunities associated with Brexit.

The watchdog said the role would be limited to advising the firm, which also operates London Thamesport, on its environmental strategy and its engagement with local enterprise bodies.

It said the MP must comply with these and other conditions, including a ban on him lobbying ministers on behalf of the company or giving advice on UK government tenders, until July 2021, two years after he left the cabinet.

Mr Grayling stepped down as transport secretary when Boris Johnson became PM in July 2019, having served under his predecessor Theresa May for three years.

Critics say he made a series of poor decisions during his time in the job, including awarding a contract to a group of ferry operators to provide extra capacity after the UK left the