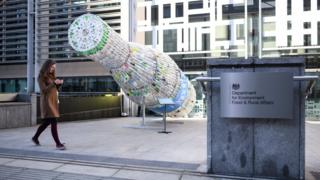 British civil servants were offered specialised support to deal with the strain of preparing for a no-deal Brexit, the BBC has learned.

The Department for Environment, Food and Rural Affairs (Defra) spent £40,000 on counselling services in London, York and Bristol.

The surgeries were primarily for those working on “emergency preparedness in case of a no deal scenario”.

The government said the wellbeing of its staff was “always a priority”.

The three-month contract, which was awarded to Gloucester-based employee assistance firm Care First, was brought to the BBC’s attention by the data firm Tussell.

It was designed to bolster Defra’s in-house mental health services while the department made changes to its support programmes, and ended on the 31 January.

A Defra spokesperson told the BBC that the department was committed to the mental health, safety and wellbeing of its employees, and had “a range of services on offer to support staff’s mental health”.

Last year, the Civil Service announced it had trained 2,200 staff to be “Mental Health First Aiders”.

With responsibility for food and water, animal movements and waste strategies, Defra is one of the Whitehall departments with the largest no-deal Brexit workload.

More than 1,300 employees have been recruited to assist with its contingency preparations.

In February, analysis by Tussell found that Defra had awarded 19 Brexit-related contracts to professional services firms – the highest number among government departments.

One agreement, worth £15,000, was awarded to help the department to assess “the impact of Brexit on the milling wheat and malting barley supply chain”.

In January, Environment Secretary Michael Gove, who is in charge of Defra, warned that farmers and food producers would face “considerable turbulence” if the UK left the EU without a deal.

He told the Oxford Farming Conference it was a “grim and inescapable fact” there would be tariffs on exports and new sanitary and other border checks.

Are you one of the Defra employees to receive counselling? Are you a civil servant in another department who has sought similar help? You can send your experiences to haveyoursay@bbc.co.uk

Please include a contact number if you are willing to speak to a BBC journalist. You can also contact us in the following ways:

Or please use the form below: