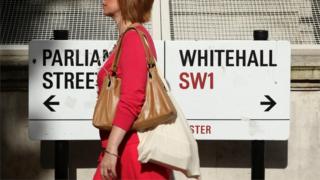 Major changes to the civil service are needed to tackle “group think” in government, Michael Gove has said.

The Cabinet Office minister said the “metropolitan” outlook of decision-makers had contributed to government becoming “estranged” from the people.

More diversity in recruitment and emphasis on mathematical and scientific skills was key to making officials more responsive to the public’s needs.

In recent days there has been speculation about the future of the UK’s top civil servant, Sir Mark Sedwill, who serves as cabinet secretary in No 10 and the PM’s national security adviser.

There have been reports of tensions between Sir Mark and some of the PM’s political advisers over the government’s handling of the coronavirus pandemic.

Sir Mark was appointed by former PM Theresa May in 2018 after working alongside her at the Home Office.

The Financial Times reported that he could announce his departure as early as Monday.

In response, No 10 said Sir Mark “continues to work closely with the senior team to ensure that the government receives all the advice that it needs”.

Meanwhile the Conservative Home website quoted friends of Dominic Cummings, who is regarded as Boris Johnson’s most influential aide, saying he told a meeting last week that a “hard rain is coming” to No 10 and the Cabinet Office, which co-ordinates the implementation of policy across the government.

In a speech on the future of government and the role of the UK’s politically neutral civil service, Mr Gove said the coronavirus pandemic had highlighted the scale of the “structural inequalities” in UK society.

In the speech, he said the government’s mission to level-up economic opportunity in Britain required ambition, innovation and experimentation on a scale comparable to US President Franklin Roosevelt’s 1930s New Deal.

However, he suggested the government was not well placed to respond to the economic challenges and opportunities posed by automation, artificial intelligence and robotics, because of its “distance” from the people.

Mr Gove, who like Mr Cummings was a key figure in the Vote Leave campaign, said the 2016 Brexit referendum result had laid bare the extent to which “every arm of government seemed estranged from the majority”.

As well as moving more civil servants out of London, he said the lack of commercial expertise must be sorted, with more decision-makers with a proper understanding of mathematical, statistical and probability questions.

“Government departments recruit in their own image,