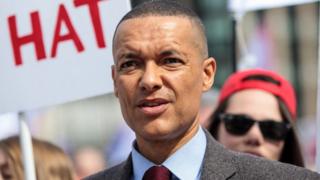 In an article for the Guardian, he said he feared “necessary truths may go unspoken” if he didn’t put himself forward.

Shadow foreign secretary Emily Thornberry is also standing, and others are expected to join the contest.

Mr Corbyn will stand down “early next year” after Labour’s election defeat.

Others who have said they are considering a pitch for the leadership include Sir Keir Starmer, Yvette Cooper and Lisa Nandy.

Shadow business secretary Rebecca Long-Bailey, thought to be the favoured candidate of the current party leadership, has yet to say whether she will stand.

It comes as Laura Parker, the most senior staff member in the Momentum group which backed Mr Corbyn’s leadership bid, said she is stepping down.

In an email to members, she said she would not be leaving the group but wanted to spend more time with her family.

In the article announcing his candidacy, Mr Lewis praised Labour’s outgoing leader for “inspiring a new generation of members”.

But he said “indecisiveness” on the issue of Brexit and “disconnected policies” were behind the party’s poor election performance, its worst since 1935.

He added that Labour was “never democratised on the scale” that members expected after Mr Corbyn won the leadership in 2015.

The party, he wrote, needs an “army of activists” who have a “serious democratic stake in the movement”.

“I don’t want to manage the labour movement, I want to unleash it,” he added.

He distanced himself from the Blair and Brown years, saying that the party often had “the legacy of the 2000s thrown back in our faces”.

He has been an MP since 2015, after taking the previously Liberal Democrat-held seat of Norwich South.

He rejoined Labour’s frontbench in January last year, having resigned in February 2017 in order to opp