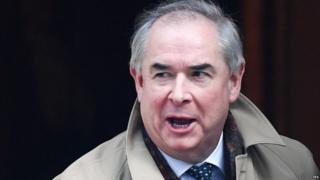 The public is entitled to be concerned about the creeping “judicialisation of politics”, the government’s chief law officer Geoffrey Cox has said.

The Tory cabinet minister said people were right to worry that unelected officials, including judges, were usurping Parliament over key decisions.

But he warned against a “headlong rush” to curtail the judiciary’s powers, saying any change must be considered.

No 10 has promised a review after last year’s legal fight over prorogation.

The government’s attempt to suspend Parliament for nearly six weeks last autumn, at the height of the Brexit crisis, was found to have been unlawful by the Supreme Court.

Although the government complied with its judgement, the decision angered No 10.

Ministers argued that the UK’s highest court was essentially involving itself in political matters.

The Conservative manifesto promised to review the relationship between the executive, Parliament and the courts, including whether the process of judicial review, in which people challenge government decisions in court, is being abused for political ends.

Earlier this week, No 10 insiders highlighted the multiple judicial reviews launched against the deportation of foreign national offenders to Jamaica as evidence the system was not working as it was intended.

The Court of Appeal’s decision to put on hold the removal of some of those due to be deported is reported to have caused “molten anger” in Downing Street, which argued it was complying with the law on deporting serious and persistent foreign-born criminals.

Speaking at the Institute for Government think tank, Mr Cox – whose job it is to provide legal advice to the prime minister and cabinet – suggested years of court battles over Brexit had undermined public confidence in the judiciary and a review was needed.

He said there was a palpable “disconnect” between “ordinary people and their votes and what happens here in Westminster” and the government’s challenge was to “restore the feelings to millions of people that they are not powerless”.

“I do think there is a question now whether or not the judicialisation of politics has gone too far and requires some amelioration or changing of the balance,” he said.

“There is a feeling that it might have done so but that is not just a question of judicial review. Throughout our constitutional arrangements, is there a sense that… there has been a move into areas which are properly for those who are elected to decide?”