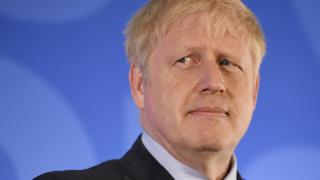 The chairman of the Conservative Muslim Forum has told the BBC he will resign his party membership if Boris Johnson wins the leadership race.

Mohammed Amin said the MP was not “sufficiently moral” to be PM.

He criticised Mr Johnson’s comments about burkas and his denial that he had mentioned potential Turkish membership of the EU when campaigning for Brexit.

But MP Priti Patel defended Mr Johnson, who had apologised for any offence caused and had defended women’s rights.

Mr Johnson topped the poll of 10 candidates running to replace Theresa May as party leader and prime minister on Thursday, winning 114 votes – more than a third of all Tory MPs. This more than twice the support for his nearest rival, Foreign Secretary Jeremy Hunt, who received 43 votes.

The remaining six candidates – following Health Secretary Matt Hancock’s withdrawal on Friday – will face another ballot on Tuesday in which they will need to secure 33 votes to stay in the race.

Mr Amin told BBC Radio 4’s Today programme: “I have been a Conservative Party member for over 36 years. We don’t expect our politicians, our prime ministers, to be saints but we do require a basic level of morality and integrity.

“And of all of the candidates in the Conservative Party leadership election, Boris Johnson is the only one that I believe fails that test. And I’m not prepared to be a member of a party that chooses him as its leader.”

He said Mr Johnson had chosen “to mock Muslim women who wear [the] niqab and burka for his own purposes” and had “denied point blank that he had ever said that Turkey was joining the European Union”.

Ballots will continue until the list is whittled down to two leadership contenders, who will then go to a party-wide vote.

When it was put to him that Mr Johnson was popular with MPs and party members, Mr Amin said: “A lot Germans thought that Hitler was the right man for them.”

He added: “As far as I am concerned, [Mr Johnson] has insufficient concern about the nature of truth for me to ever be a member of a party that he leads.”

In a Daily Telegraph article in August 2018, Mr Johnson said full-face veils should not be banned, but it was “absolutely ridiculous” women chose to “go around looking like letter boxes”. He also compared them to looking like “bank robbers”.