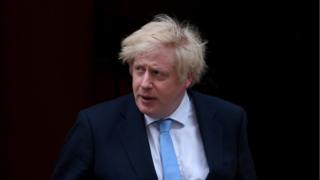 Boris Johnson will be questioned by senior MPs later amid continued calls for his top adviser to resign.

It marks the first time he has appeared before the Commons Liaison Committee – the only committee that gets to question the PM – since taking office.

Committee members are expected to ask Mr Johnson about the government’s handling of the coronavirus pandemic.

He is also likely to be asked about his aide Dominic Cummings’ controversial lockdown trip to County Durham.

More than 35 Tory MPs have called for Mr Cummings to resign or be fired after his 260-mile journey came to light.

Mr Cummings’ decision in March to drive from his London home to his parents’ farm in County Durham with his wife – who had coronavirus symptoms – and his son has dominated the headlines since the story broke on Friday night.

The PM’s chief adviser gave a news conference on Monday, explaining that he decided to make the trip because he felt it would be better to self-isolate in a place where he had options for childcare if required.

He has received the continued support of the prime minister, who said that his aide had acted legally and with integrity.

But cross-party critics have called for Mr Cummings to leave No 10, while junior minister Douglas Ross resigned in protest.

Sir Bob Neill, Tory MP for Bromley and Chislehurst, is among those calling for Mr Cummings to resign, saying the row had become a “distraction”.

He told BBC Radio 4’s Today programme Mr Cummings had “real talents and abilities” but “no adviser is indispensable”.

However, in a note to fellow MPs, Danny Kruger, former political secretary to Mr Johnson and now Tory MP for Devizes, said demanding the resignation of Mr Cummings was “basically declaring no confidence in the PM”.

In response, Sir Bob said he didn’t accept this, adding: “This is actually about us wanting to help the prime minister to get back to be able to focus on the key task of pulling the country together.”

The Liaison Committee – a panel of MPs who chair various select committees – is the only Commons committee that can question the prime minister. The two-hour video conference will take place at 16:30 BST.