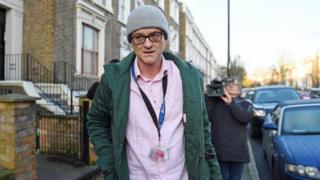 Dominic Cummings travelled hundreds of miles from London to County Durham during the lockdown when he had coronavirus symptoms.

A source close to the PM’s chief aide told BBC political editor Laura Kuenssberg that he and his wife went to his parents’ home to self-isolate.

The source insisted Mr Cummings did not break official guidance because he and his wife stayed in a separate building.

The story was first reported by the Mirror and Guardian newspapers.

“If accurate, the prime minister’s chief adviser appears to have breached the lockdown rules. The government’s guidance was very clear: stay at home and no non-essential travel,” a spokesman said.

“The British people do not expect there to be one rule for them and another rule for Dominic Cummings.”

The Scottish National Party’s Westminster leader Ian Blackford said Mr Cummings should resign or be dismissed by Boris Johnson and that it was a “key test of leadership” for the PM.

And Ed Davey, acting leader of the Liberal Democrats, added: “If Dominic Cummings has broken the guidelines he will have to resign, it is as simple as that.”

The Mirror and the Guardian reported Mr Cummings, the former Vote Leave chief who was the architect of the PM’s Brexit strategy, had been approached by the police.

Durham Constabulary said: “On Tuesday, March 31, our officers were made aware of reports that an individual had travelled from London to Durham and was present at an address in the city.

“Officers made contact with the owners of that address who confirmed that the individual in question was present and was self-isolating in part of the house.

“In line with national policing guidance, officers explained to the family the guidelines around self-isolation and reiterated the appropriate advice around essential travel.”

Government advice on 31 March was for the public to stay at home and only leave their address for clearly defined reasons, including to exercise, essential shopping or for medical needs.

At the time – and as remains the case –