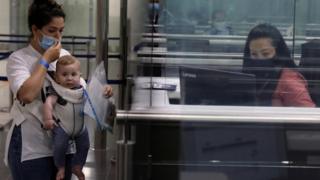 The EU has decided that from Wednesday EU borders will be reopened to citizens from 15 non-EU countries, including Canada, Morocco and Australia, but not the US, Brazil and Russia.

China is on the list, but subject to a reciprocal agreement, still pending.

The unanimous decision by the European Council is not legally binding, so states can choose not to open up to all those countries.

The UK and four other non-EU states – Switzerland, Iceland, Liechtenstein and Norway – are automatically included as “safe”.

The BBC’s Gavin Lee in Brussels says there was intense lobbying by representatives of the US, Russia and Turkey to get included on the list.

EU officials say the decision was based on a number of scientific factors:

One diplomat from a north European member state told the BBC that a “certain amount of geopolitics influenced the decision too” and that “Balkan and Eastern European states had recommended” that Georgia, a former Soviet state, be included.

The Hungarian government is understood to have lobbied for Serbia’s inclusion. Spanish officials say they requested that Morocco be on the list, provided there was an agreement of reciprocity.

Denmark and Austria were among several member states arguing for the number of countries to be fewer than 15.

But in the end, it was adopted unanimously by member states.

Each state will have to announce when it intends to start readmitting citizens from some or all of those countries.

French officials say they expect to implement the decision in the “coming days”.

The Czech Republic has published a list of eight countries that it considers safe for travel.

The EU list will be updated every two weeks.

Many border controls have been lifted for EU citizens travelling inside the bloc. Future rules for UK travellers are part of the current Brexit negotiations.

But UK nationals are still to be treated in the same way as EU citizens until the end of the Brexit transition period on 31 December, the EU Commission says.

So during this period UK nationals and their family members are exempt from the EU’s temporary travel restriction.