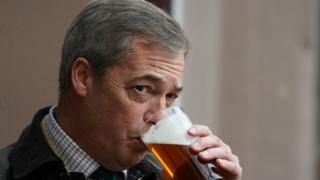 The acting leader of the Liberal Democrats, Sir Ed Davey, has written to Kent Police asking them to investigate whether the Brexit Party leader Nigel Farage has broken quarantine rules.

Mr Farage tweeted a picture of himself at lunchtime on Saturday having a pint in a pub, as many businesses in England reopened.

Exactly a fortnight ago, Mr Farage tweeted from a trip to the United States – where he was a guest at a rally for President Trump.

People travelling to the UK from the US are required to quarantine for a period of 14 days from the moment they arrive.

“There are clearly serious questions to answer for Nigel Farage,” Sir Ed said.

“It is clear from his social media posts that he was in America on 20 June, and he was pictured at a Trump rally that evening. Given the current requirements for visitors returning to the UK to isolate for 14 full days on their return, Nigel Farage appears to be in violation of the quarantine,” he added.

“By choosing to go to the pub when it appears he should have been staying at home, Mr Farage is showing a flagrant disregard for the safety of people in his community.”

In his letter to Kent’s chief constable, Alan Pughsley – which has also been sent to Home Secretary Priti Patel – the former cabinet minister said:

“I write to ask you to immediately investigate this issue, establish the timeline of events for Mr Farage’s return to the UK and establish whether Mr Farage was in breach of his quarantine. It is vital that lives are not put at risk by breaches of quarantine.

“I am copying this letter to the home secretary as I believe this case illustrates the difficulties that the police and Home Office will have in enforcing the quarantine rules as they are currently set out.”

So how has Mr Farage managed to quarantine back in the UK for 14 days, if he was in the States two weeks ago?

He insists he has “been back from the USA for two weeks.”

To all those screaming and shouting about me going to the pub….